Posted on June 27, 2016April 19, 2018 by Margo O'Farrell
Left Busselton to head down to Augusta, and to go through Cowaranup and Margaret River Wine Region.  UP means ‘place of … ‘, but this town should just be called Cowup, although the locals call it Cowtown because of all the cow statues. There are actually 27 cow and 9 calf statues in the town.
Before I ventured into the town, I deviated to a side street just checking if there were any cows near the school … There weren’t, but I did find a Big Apple … Very neat. 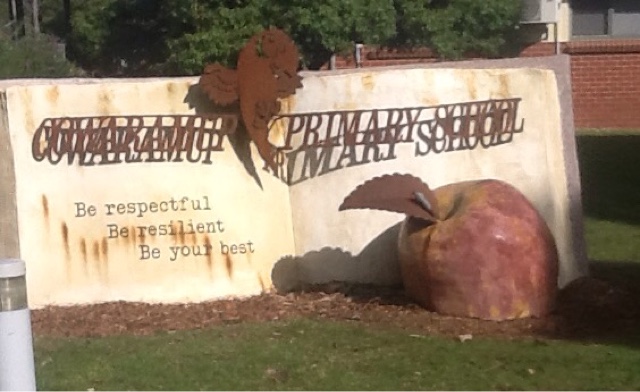 I took photos of all of the cows and calves, but I was having trouble uploading the blog so kept the photos that had something unusual about it/them. I discovered that there was a celebration just about to start in the region called Cow Parade … Next weekend the town people dress up as cows … Go figure!
First one … Cute cow and calf. 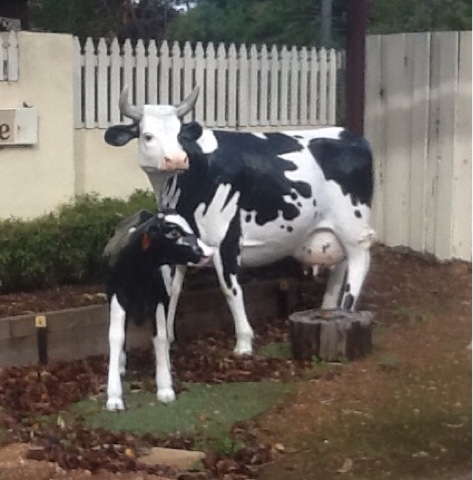 This one mooed when I went near it. 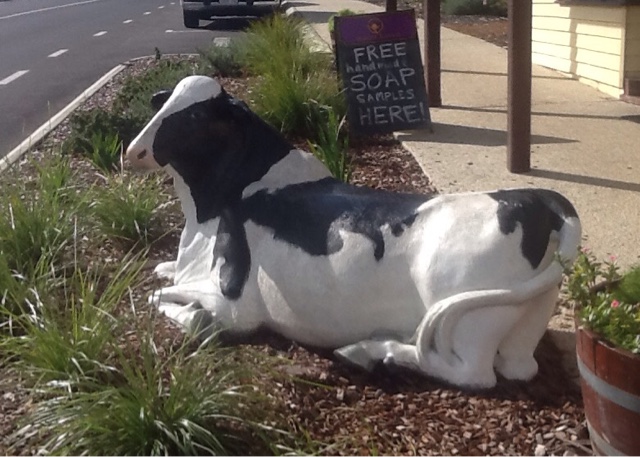 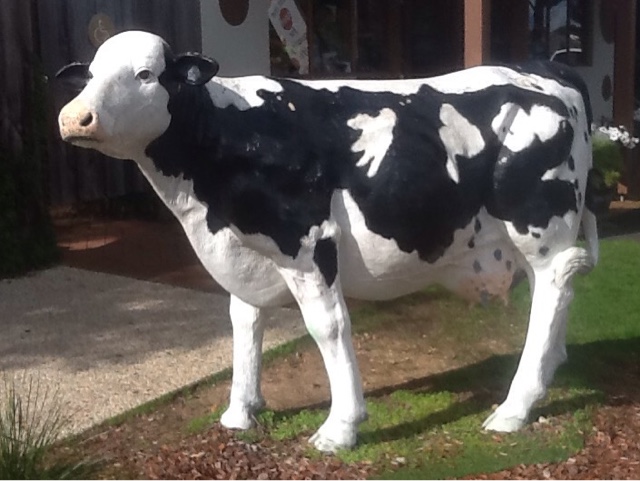 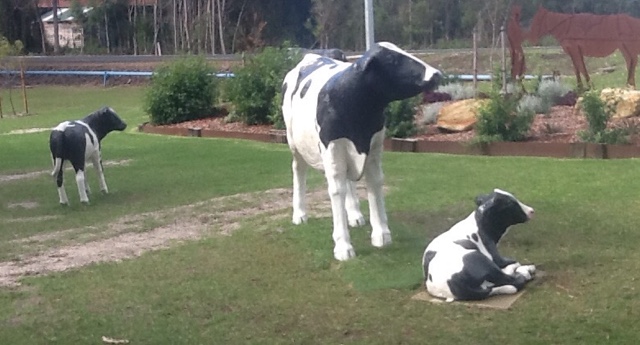 This one had its own postbox … It was outside the Post Office of course! 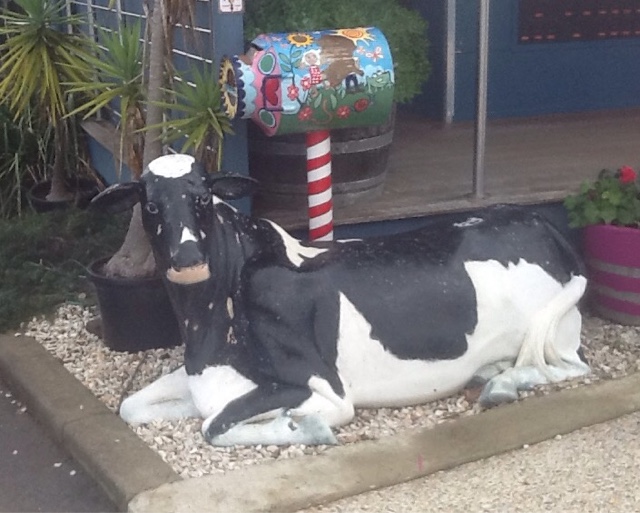 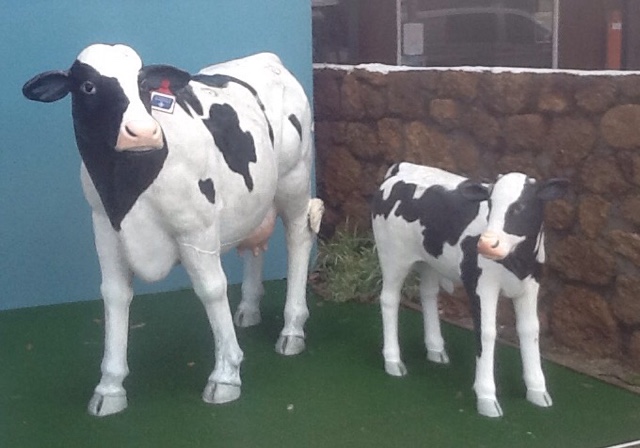 An attempt by the owner of Black Sheep organic shop to fence in this cow. 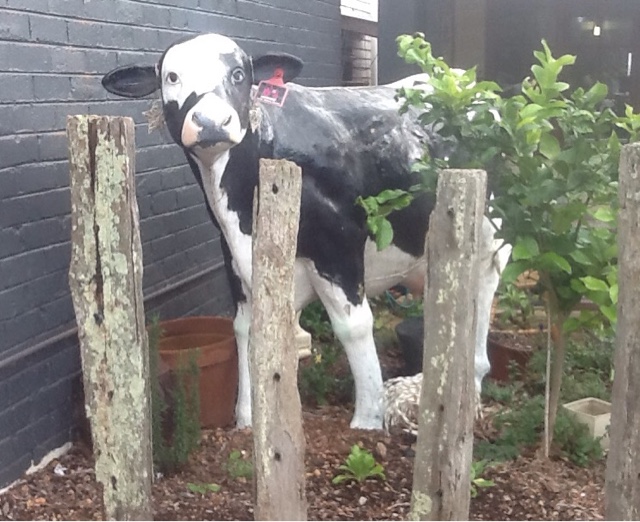 And then there was this ‘specimen’! I didn’t include this one in my count. 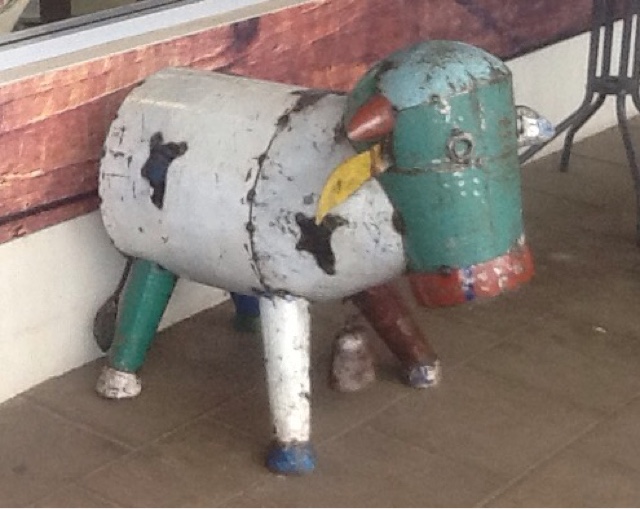 The actual reason to visit Cowaranup was to capture the Rump on a Stump, on the Big Things list. 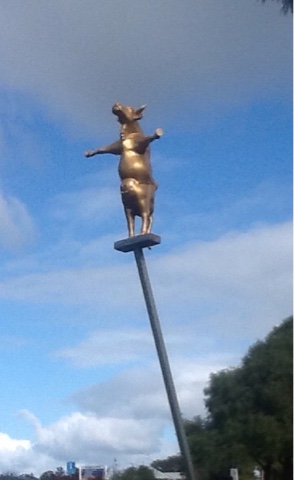 For some reason later down the road towards Margaret River I turned into a maze place (one of many I saw) I found this cow that must have escaped from Cowtown. 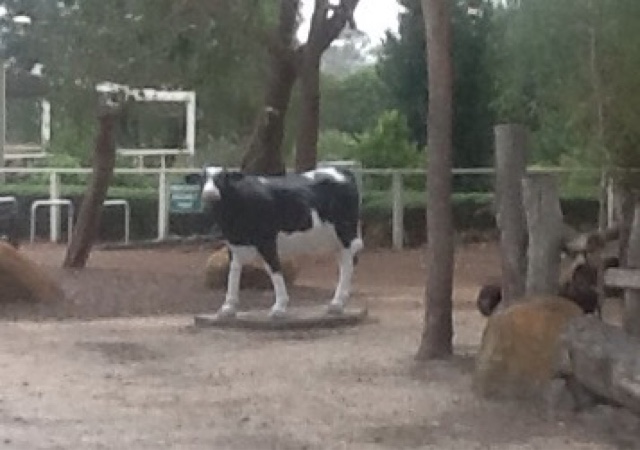 I found a town that I is one after my heart … Witch life, and it had a Big Candle. 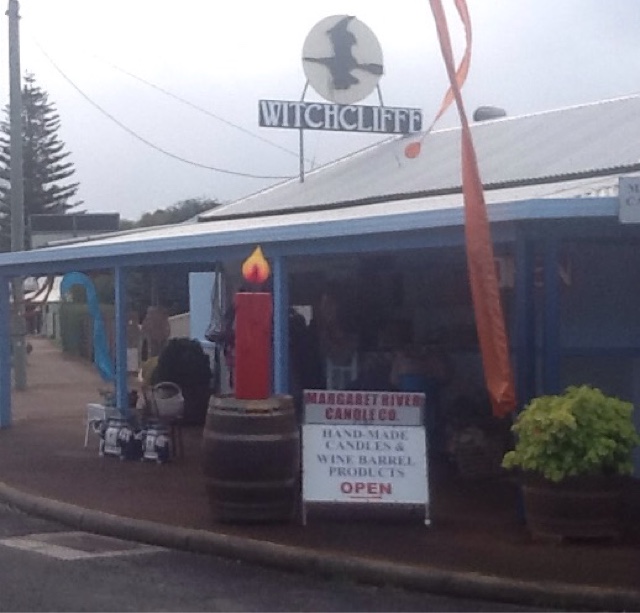 Other witch things … This small statue at the local servo. 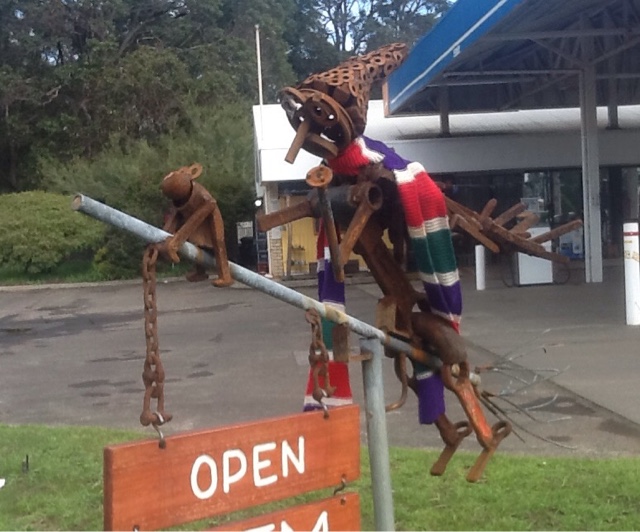 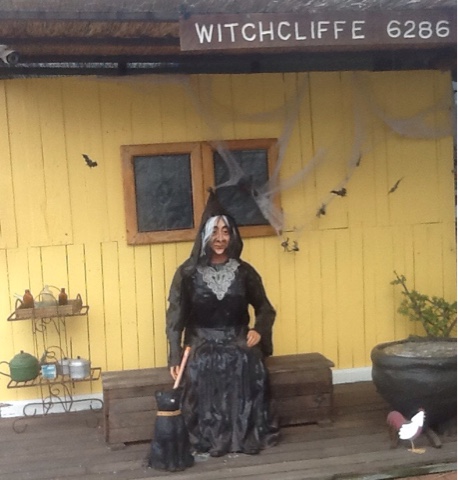 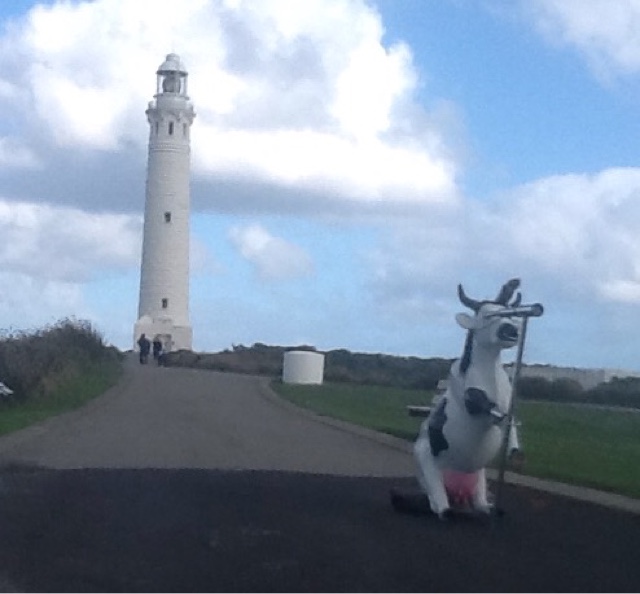 This is a closeup of the cow … It is from a previous Cow Parade celebration. Someone has a very good sense of humour lol! 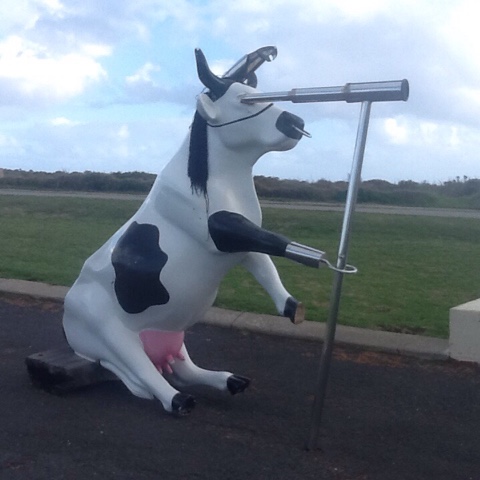 Spent the night at Augusta … This was the view out of the back of the van … Pretty place to spend the night … Cold though! 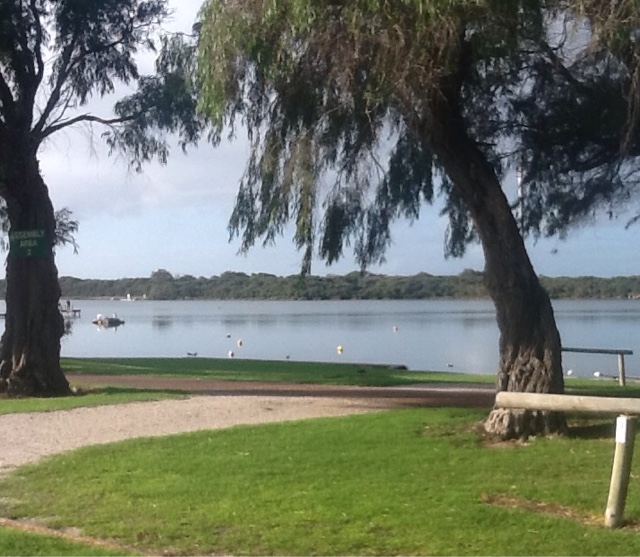 Drove off the beaten track to Prevelly Beach … Not sure why, but found this very neat Big Skateboarder. 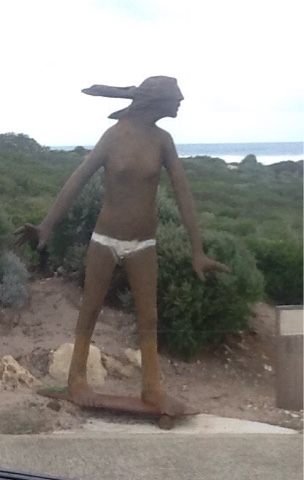 And this amazing Big Man and His Dog, complete with stick … The sculpture was actually called The Stick! 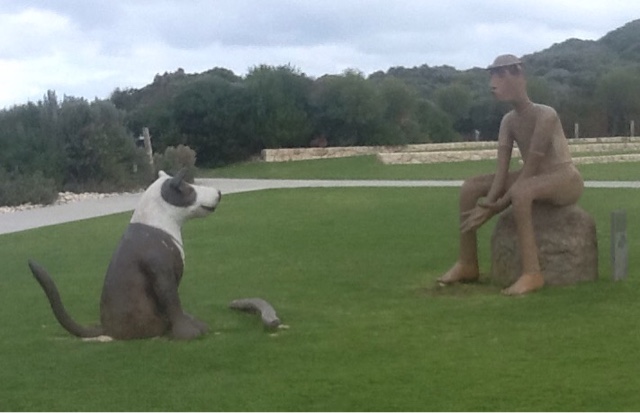 Can’t tell you where this photo was taken as it was in the middle of nowhere in Margaret River Region. Interesting use of hay bales … ?Minions? 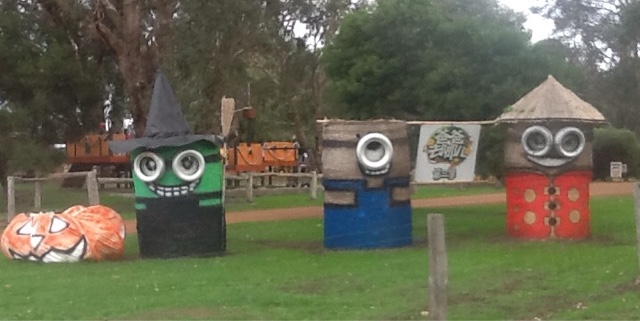 Found a fab place … Margaret River Venison Farm … Yum, and it had a statue of a deer … Very professional. 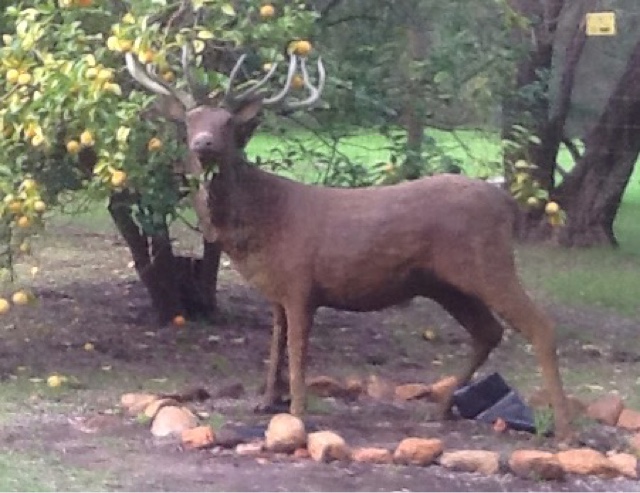 Nearly back at Busselton … Just had to find the Chick on a Stick. Some locals also call it Mole on a Pole … A bit disrespectful. The statue is in the middle of a large lake so unable to get close enough for a decent photo. The winery owner put it up without council approval, but when they asked for it to be removed … He refused so they issued permission for its installation … Good way to get around red tape lol! 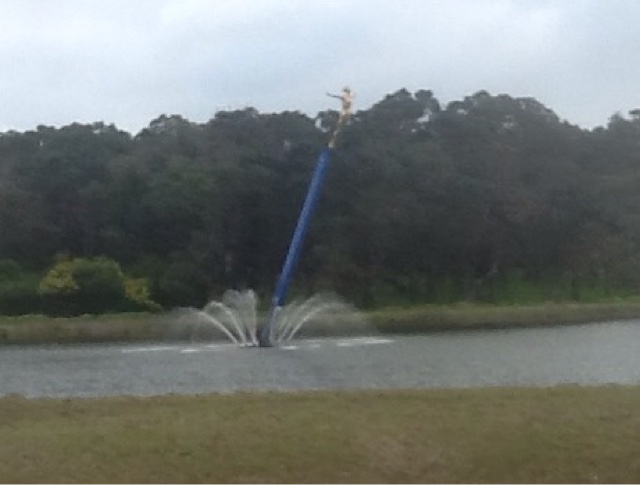 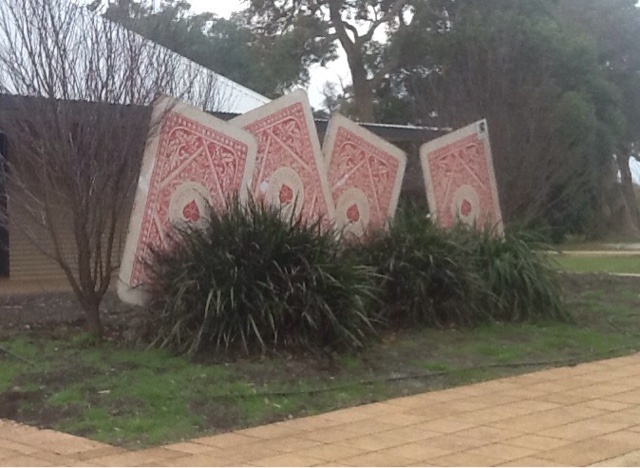 This very impressive silver kangaroo sculpture was too good to leave out … In the bar of Vasse Felix winery … Very realistic.

Visited a few caves on my way around Margaret River … This photo was taken in Gnilgin Caves … Very pretty use of lighting. 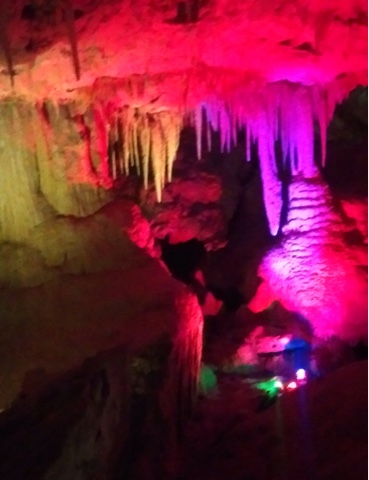 And this statue of an extinct megafauna at another cave system … Funnily enough called the Mammoth Caves.

Finally back in Busselton, and back at the Mandalay Tourist and Holiday Park … The best park I have stayed in since I started on my trip around Australia … The floor of the showers is even heated … Best ever! Stay there if you travelling around … 5 stars from me!

Last, but not least … Busselton Jetty … My photo failed to show the size and length (nearly 2 kms long), but thought it should be included.

Off to Albany and Esperance … Wish me luck xx