Arrived at Monkey Mia safe and sound, but before leaving I finally found the Big Banana … It had been disguised as a billboard and blowup clown display for the Great Lowitz Circus (formerly Great Moscow Circus). As I was leaving Carnarvon I saw it after the ‘clown’ had been deflated so I took a photo. 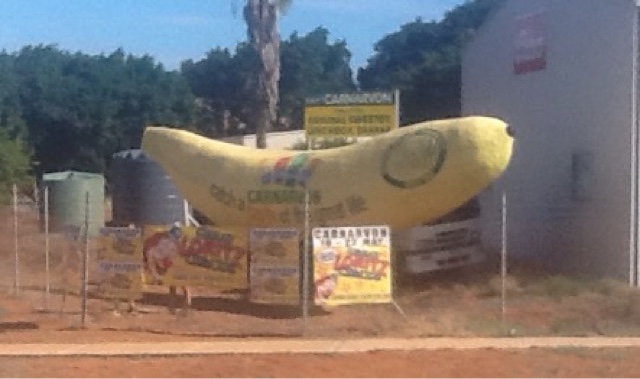 I have been hanging out at Monkey Mia … A pretty place … This is the view out of the back of the van at the campsite … Pretty amazing huh? 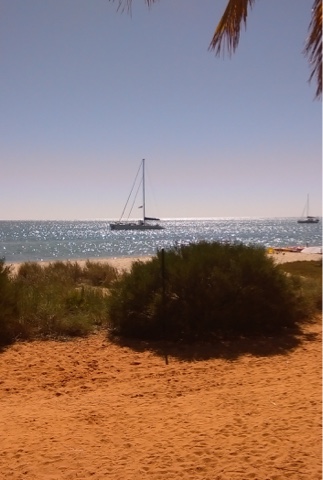 The weather on the first day was stunning, but it has deteriorated since then … Been raining all day … It isn’t cold though!

Have come to Monkey Mia to have a ‘dolphin experience’. I am a bit underwhelmed by it. I first heard about Monkey Mia in the 1990s … I heard that you could swim with the dolphins and pat them and feed them … Not now though! I am glad that it has changed … Don’t get me wrong I would have loved to do those things, but I know that dolphins hate to be touched (told that by a marine biologist in New Zealand).
The actual ‘experience’ is standing on the shore while several people are chosen from the 50 – 100 people there … 1 fish is fed to the few dolphins who turn up … It was interesting to see them swimming around. The worst of the ‘experience’ was the welts I have from the stinging jellyfish in the water! Oh well I did enjoy it … Just thought it might be more up close and personal 🙁 This dolphin is called Puck … A regular visitor to Monkey Mia. 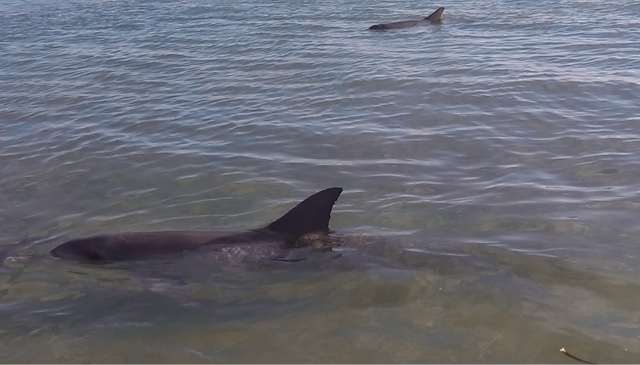 Having some R & R time … Back to the blog in a couple of days.