R&R over … Back on road. After Monkey Mia, called into Hamelin Pool to check out the stromatolites, an early form of life on this planet … Last to be affected by event that killed off the dinosaurs, and the first lifeform to recover. Fossilized stromatolites provide ancient records of life on Earth, some of which date from more than 3.5 billion years ago. 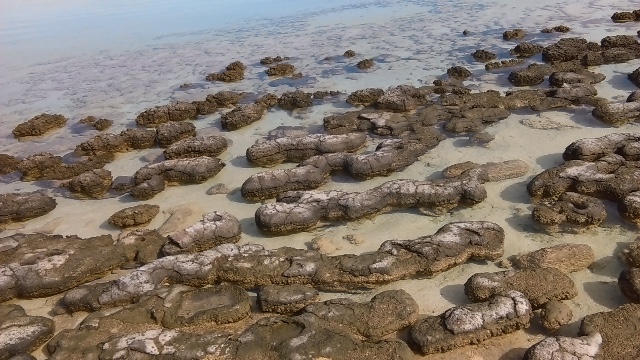 Then onto Kalbarri … Another pretty place in Western Australia, on the coast open to the Indian Ocean. Many trees are almost completely flattened to the ground … Winds must get very violent here! Have been exploring the coastline, and lots of rock formations are reminiscent of the structures around the Eagle Hawk Neck
Found an interesting lake near Kalbarri. It is called the Pink Lake, and although it is obviously an interest feature, there were no signs to it, nor any where to take a photo. I found it on a map so went to check it out … Had to pinch an image from the Internet. It is actually pink, but at the moment only on the edges. It is called the Hutt Lagoon, and is a pink lake, a salt lake with a red or pink hue due to the presence of the carotenoid-producing algae.

Not much else to report … Am off to a parrot rescue centre tomorrow, and checking out more cliffs and beaches.