I did make it to the foothills of Mt Kosciusko, after crossing several snow fields … All done in a frock, and a feather in my hair (thx Baileys for present) … It did raise a few wry smiles from people rugged up in winter woollies and snow shoes.

But before I get ahead of this story, I found some more Big Things. This Big Ball as I left Cooma, heading towards Jindabynne. 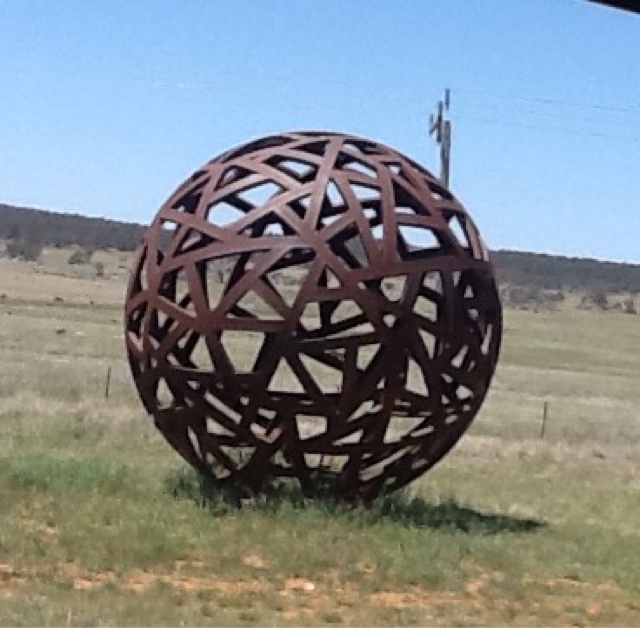 In BerridalecI came across a few yellow bikes, but no explanation. I continued on to see if I could solve this puzzle.

Coming into Jindabynne … Voila an explanation .. A road sprint race advertising … Ingenious method … But wait, there are more! A rhino sculpture wrapped in yellow fabric in a paddock! 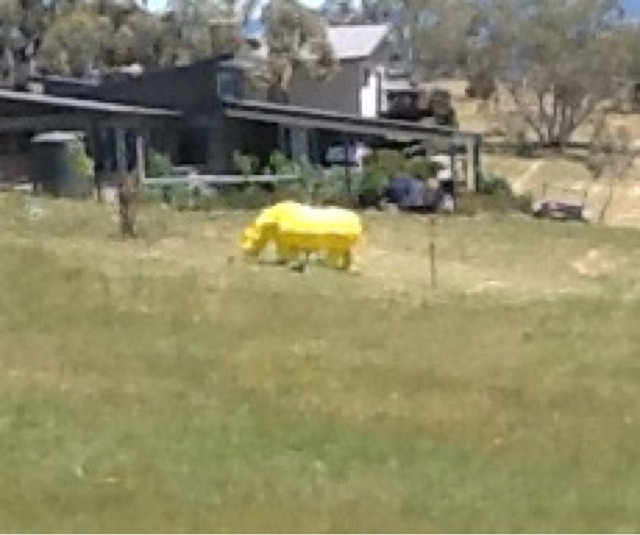 Nothing like wrapping a famous man’s statue in masses of yellow fabric … I am sure Strzlecki would be unimpressed! 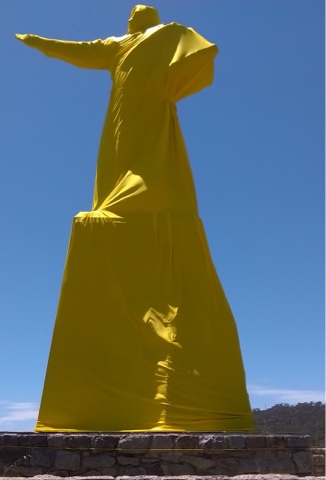 But the not-so-big harp on the foreshore was very beautiful. 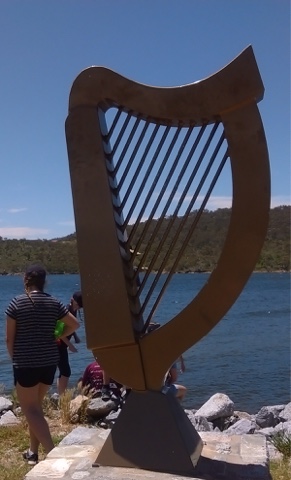 Just before Thredbo … for a change … A Small Ball lol! 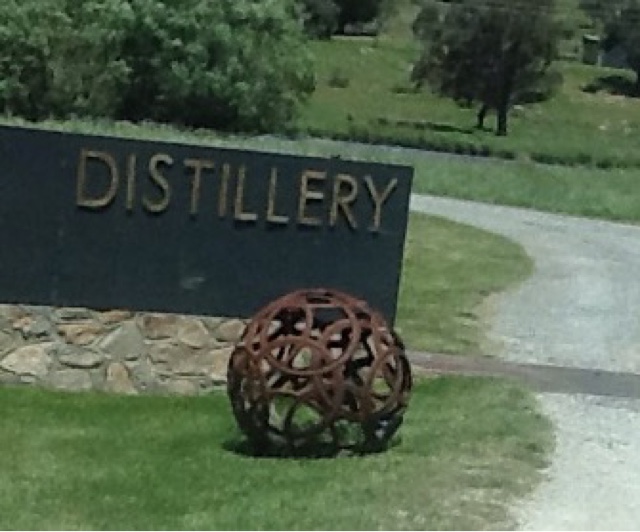 There was a ‘wrapped in yellow fabric’ horses head … Presumably an advertising symbol. 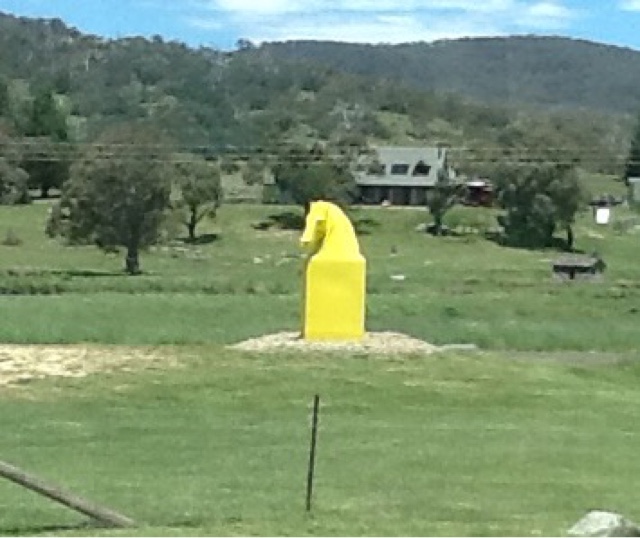 And so it continued … More yellow things … A Big Yellow Flower and small bike. 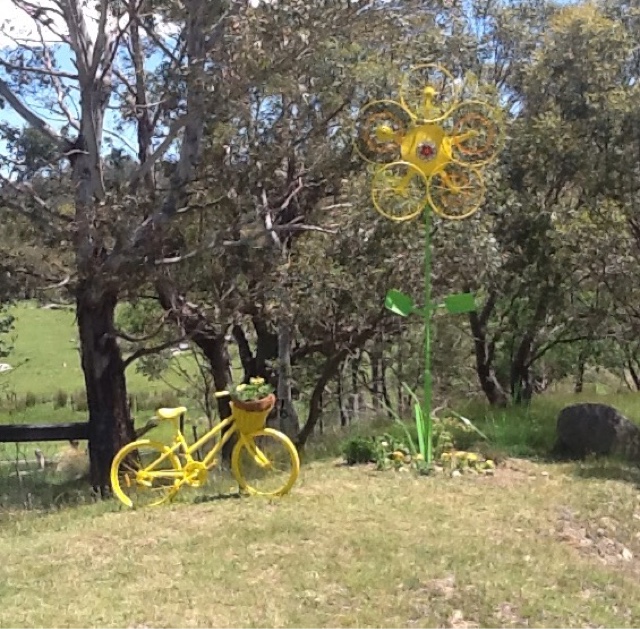 I continued on towards Thredbo and Mt Kosciuosko … Trekked to with 4 kms of the top of the mountain range, but did use a cable car for part of the walk! 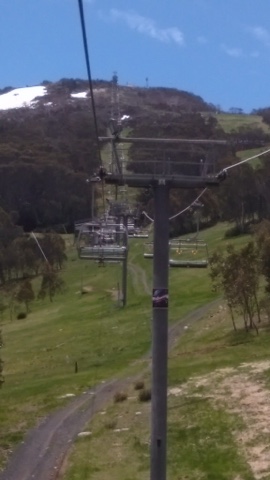 But after crossing the second snow field, I decided to head back … I wasn’t really dressed for such a trek … May be the only person to attempt the climb in a frock and hair decorations … I did have ‘sensible’ shoes yeah! I made it over the next ridge before turning back! 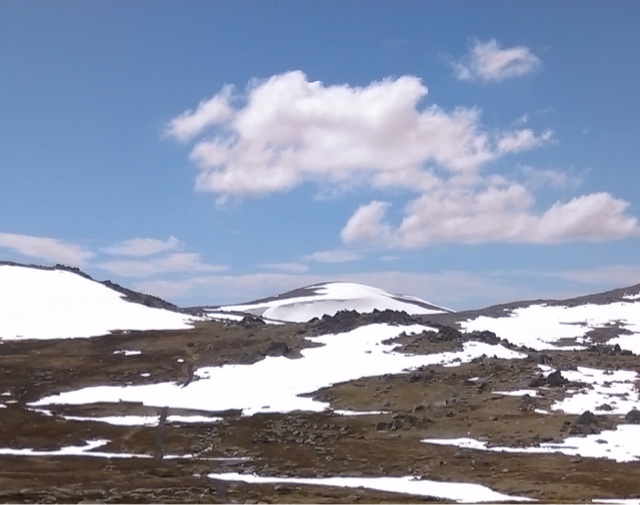 I am ending this blog here, but I have lots more stuff … Sorry Moira … I have found that although I am in Canberra, the Internet signal is intermittent. You would have thought that being within spitting distance of the seat of democracy that the signal would be good … NOT!

One Reply to “Hiked to the snow line on Mt Kosciusko … Tick!”