Had an adventurous day today, and ended up in Port Macquarie … A lovely seaside town whose waterfront is reminiscent of Salamanca Place. Bands playing, buskers in the park, and lots of drinking.

I forgot to say a big thank you to Paul and Annabel for their hospitality over the previous week, especially Paul who fixed my leaking water container on Narniavan … Lots of squeezing under the van on wet grass, accompanied by ‘attack chook’ who was visiting and had taken a shine to Paul lol.
I stayed last night at Little Italy Rest Area … Absolutely fascinating history on how some Italian settlers came to Australia and why they settled in the region. Worth a visit if you ever pass that way … South of Ballina, in the Macleay Region. The museum has so many original documents and knick knacks … I do hope they take steps not to end up like the Waltzing Matilda Centre in Winton!
Outside Coffs Harbour on the highway was a Big Windmill, obviously under repair. I find it hard to understand the symbolism of some of our ‘big things’ when used as advertising fodder … Anyone know? 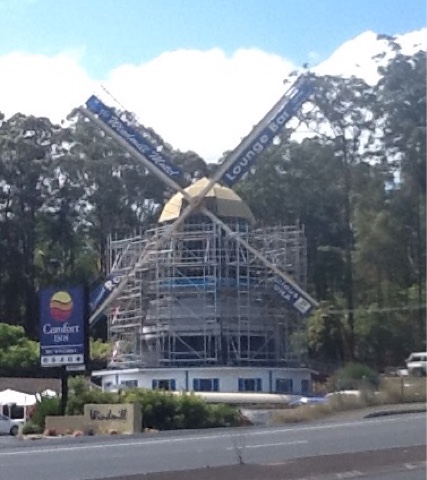 The Big Muffler was supposed to be in June St, but I couldn’t find it. Not sure why I did what I did, but I looked up Berklee Mufflers to see where they had moved … Went there and lo and behold a Big Muffler! 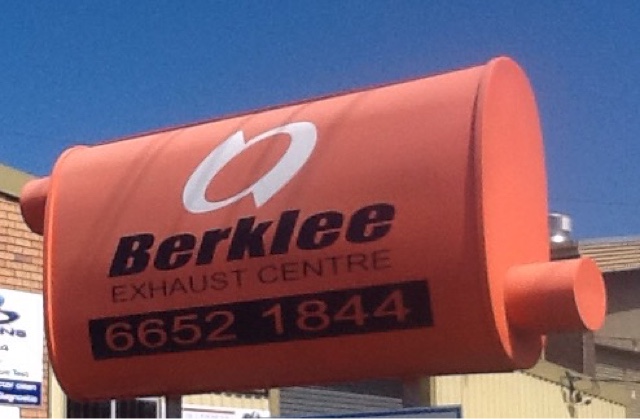 On the highway … Cunningham’s Bananas … And the Big Bunch of Bananas. I went in to buy a banana and it was so expensive as a single item … They like to sell ‘hands of bananas’ only! Won’t go there again! 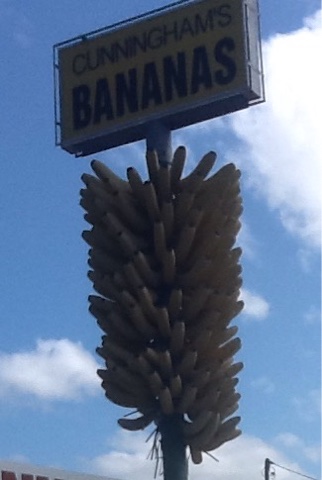 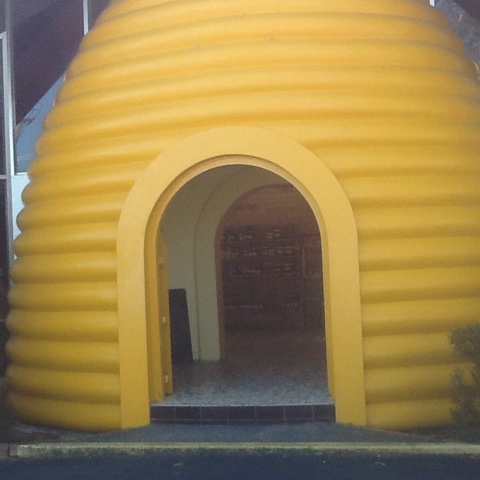 And near it, a dingy advertising Urunga … Not ‘big’ though, just different. 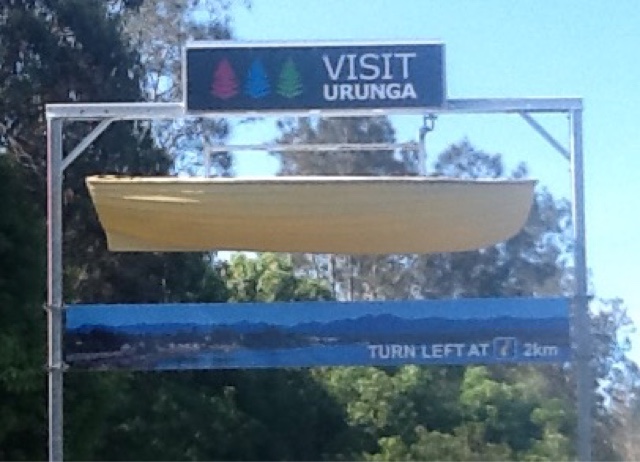 Before I talk about the Big Koalas, I want to tell you about something that happened. I pulled out of a layby with lots of space to the next vehicle … About 700 metres … And down came the rain. I did slow up a bit because it was hard to see, and a truck suddenly appeared on my tail. I obviously annoyed the truck driver as I wasn’t travelling at the prescribed 100 kms/hour. He blew his horn … A lot … So I sped up because I could see an overtaking lane coming up. I slowed up to give him the opportunity to pass me … He came right over onto my lane so I had to go over to the shoulder. I had slowed enough so it wasn’t too dangerous, but it was raining heavily so the road was wet. He gave himself about 3 metres clearance before he moved to the left hand lane kicking up masses of water. I couldn’t see anything except his tail lights. Why am I telling this story? On the road I read lots of news and there are lots of accidents on the Pacific Highway, some fatal, some involving trucks. If I hadn’t been careful, I could see an occasion where it would be feasible to run off the road under today’s circumstances, and the truck would have driven on oblivious to the accident he just caused. I wonder how many accidents are down to bully-boy tactics of the truck drivers that are pissed off by careful drivers like me? End of rant!
Now back to Big Things … In and around Port Macquarie is a koala sculpture trail on show until December 2015. I did plan to photograph them all until I discovered there are 50 of them. Instead I captured just 8 in and around the waterfront area … enjoy!
Dame Edna? 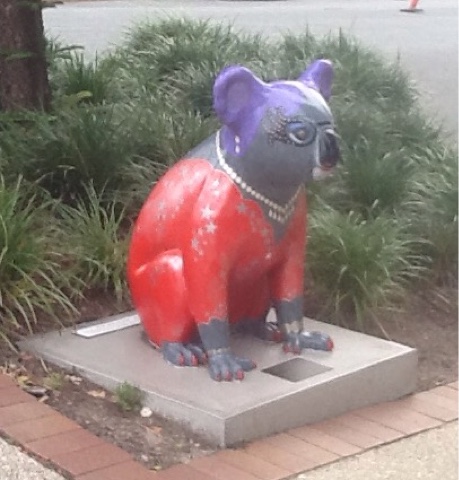 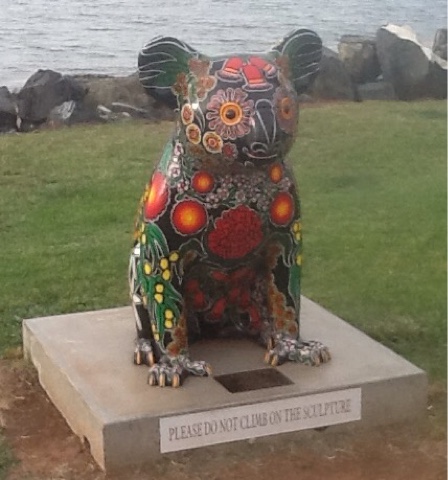 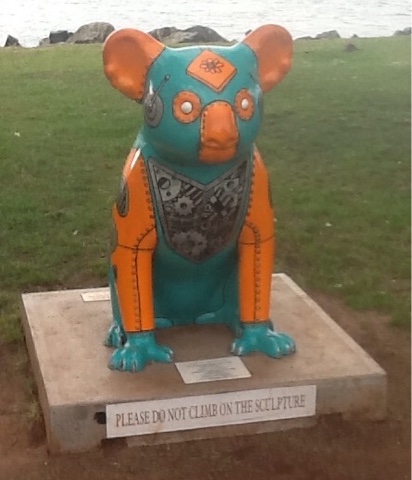 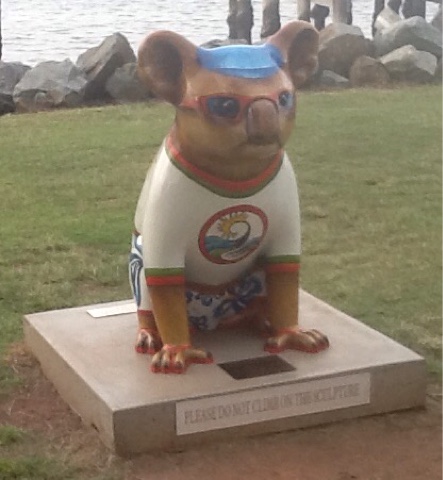 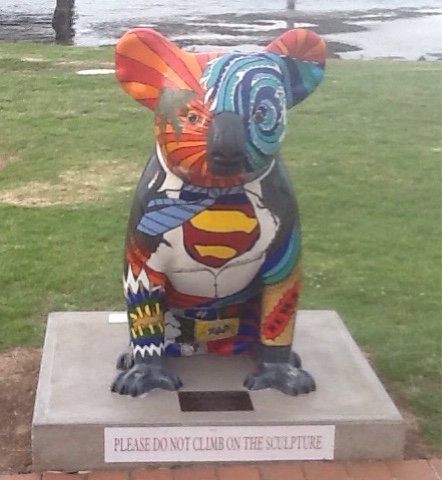 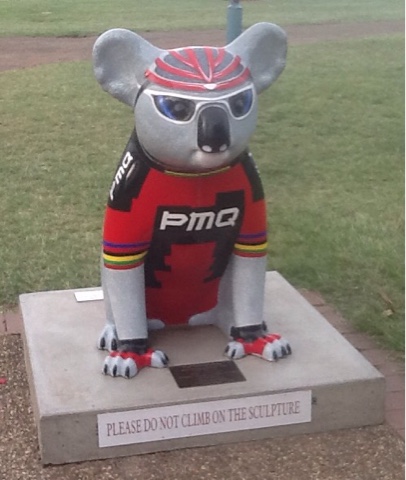 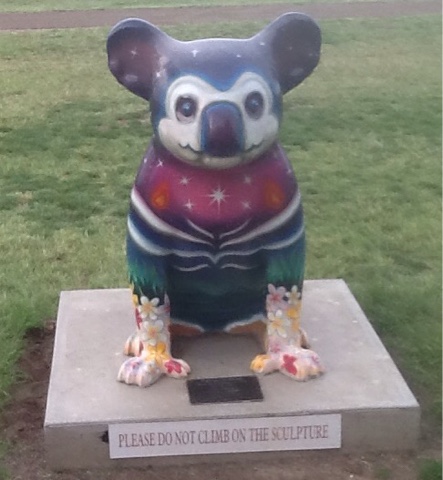 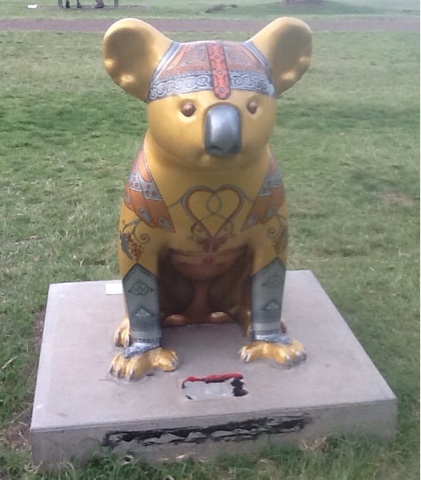 Finally, but not least is a depiction of a courageous act of several Aborigines after invasion to save some sailors whose boat was sunk on its way into Port Macquarie harbour in the 1800s. 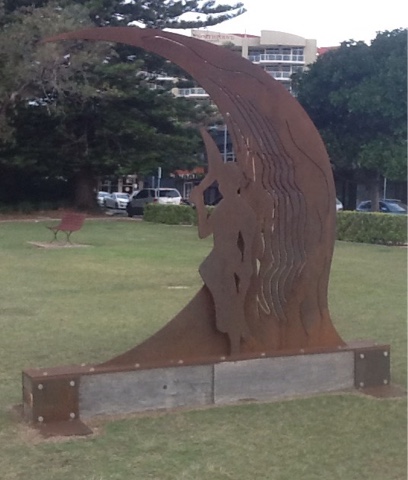 I did see more examples of Big Chainsaws, and more horses … How many is too many? I may not capture many more unless they are exception … Just like Big Golfballs … There are lots of those around!

Tomorrow … Sydney! And the Scultptures by the Sea at Bondi … I have missed this exhibition for several years, and determined not to miss it again this year.
Going south also as it is very hot and muggy in Queensland at the moment. Hoping it is less muggy in Sydney.