Last night I camped at Euromanga with terrific blokes, but more about that later. Firstly I have to tell you about another nasty man who physically pushed me out of the camp kitchen at Windorah Caravan Park. Apparently being Tasmanian means I must be a greenie, and the greenies have destroyed the forestry industry, and he doesn’t like it! I wasn’t hurt, but I did report him to the camp manager. I also went and saw him the next day. He reluctantly apologised, but only after I threatened police action. What I don’t get is the redneck attitude in west Queensland. They even think all of the kangaroos need to be killed so the cattle can have all of the grass to eat!

As well as extracting an apology from him, I also had severe words with his mate who stood by and witnessed the event. Men need to stand up for women to see if we can reduce the violence against women. The men like Redder, the nasty man, think it is ok because they are going through ‘a bad patch’ and excess alcohol makes them ‘do it’! How to get it out there … whatever we are doing education-wise is not working … violence is not the answer!
Ok rant over … now some nice stuff. The Three Stooges … what a fabulous bunch of blokes (mustn’t call them guys … too American they reckon lol) … not called Larry, Curly and Mo, but John, Greg and Geoff (?Jeff) from the Gap in Brisbane. What a hoot. There was only 3 cars camping in the caravan park at Euromanga … so we had a very convivial evening drinking Bundy Rum and Chocolate Liqueur … made a big dent in our respective supplies lol. We invited the young German backpacker, Richard, travelling in a Jucy van, to join us. Towards the end of the evening I even offered to sing Silent Night in German, then I remember I wasn’t allowed to sing in public. We gave Richard a lesson in the King Richards of England, and told some very bad jokes. Actually I did my usual ‘start a joke then realised I couldn’t remember the punchline’. It turns out their wives have sent them off to ‘fossick’, but I suspect it was a ruse to get them out of the house!
The next morning I was woken early to have a cooked breakfast with the ‘boys’. I retired to my van to watch them decamping … so funny! They had a system … One bloke suggested some chore to be done by another, they agreed to do it, but the 3rd one actually did it … very ‘Monty Python-ish’, but it worked. Decamping was a mix of Monty Python and Carry on movies … apparently though it took less time than usual. They had one of those trailer campers, and it took several attempts to get it packed up.
After they left I finally had a chance to decamp myself … I was on the road by 10 am … a new record for me. I called into a cafe for an early lunch … the Echidna Place at Thargomindah and found the Big Utensils. 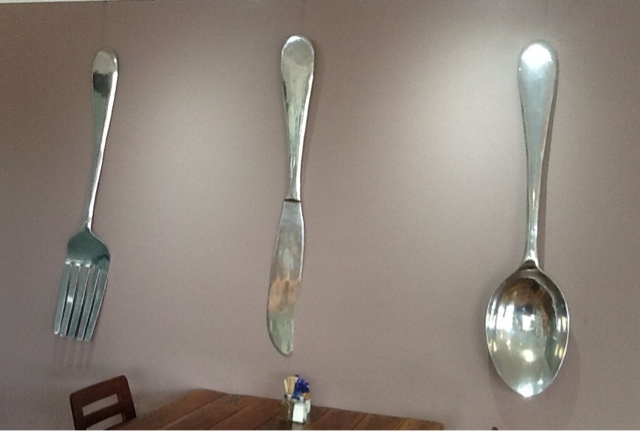 Many kms later I drove through Eulo … the Lizard Town … and found this Big Lizard … not particularly attractive … they like their lizards ‘frilled, not grilled’ apparently according to road signs I saw lol. 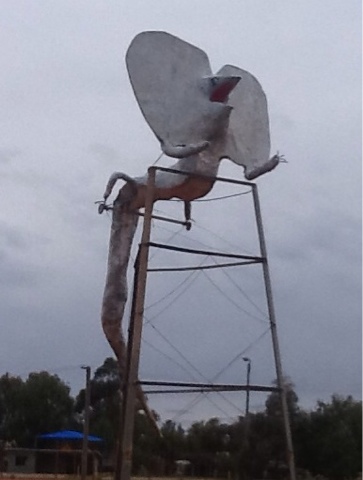 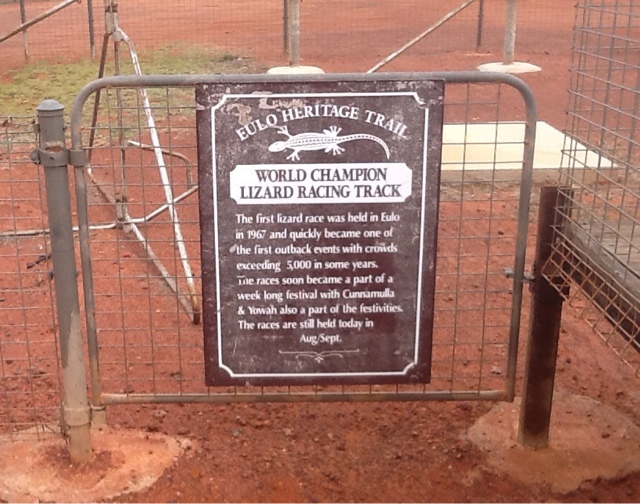 As exciting as all of this was, something much more interesting was next to both these gems … a megafauna sculpture of the Big Diprotodon Optatum. The massive Diprotodon optatum, from the Pleistocene period of Australia, was the largest marsupial known and the last of the extinct, herbivorous diprotodontids, that lived 1.8 million to 40 000 years ago. Related to the wombat and koala, more the size of a rhinoceros … the first megafauna sculpture I have come across. 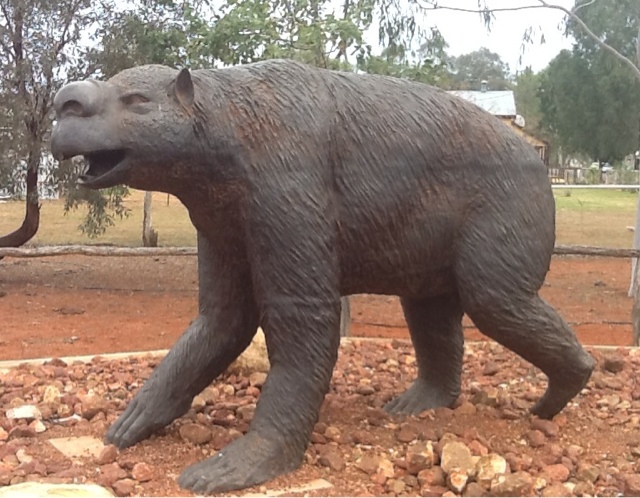 I finally arrived at Cunnamulla for the night where I found a statue of the Cunnamulla Fella immortalised in a Slim Dusty song. 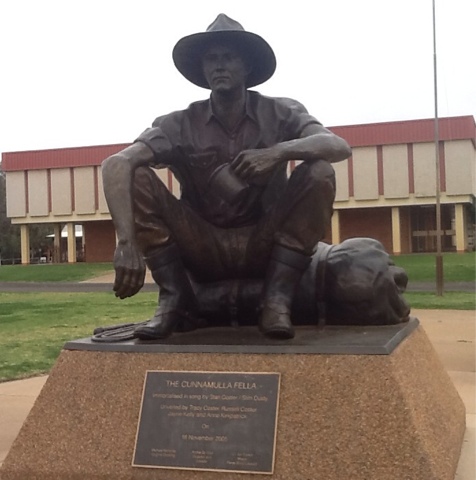 Tomorrow I am off to either Goondiwindi or Dalby, haven’t decided yet.
BTW if the Three Stooges do read this post, please email me at margo.ofarrell@gmail.com and let me know if you found any gemstones at the Vietnam Veterans Retreat where you were headed today.