Well who would have thought it … sitting in the camp kitchen at Conway Beach near Airlie Beach in my winter woolies and snow jacket! Even a hardy Taswegian is finding it cold!

I have had several adventures since that awful fatal car crash, and it has lifted my spirits a bit. Firstly there was Airlie Beach … expensive, over-run by tourists and costing twice as much as any caravan park I have been in since leaving Tasmania! There was an interesting potential ‘big thing’ on top of a shop, so I took a pic. It isn’t very good because it was blazing hot and the sun was overhead … a big change from tonight! I have called it the Big Tiki, but any readers out there who know better may need to correct me … I don’t actually know what it represents, but it was big. There were 2 ‘big’ shells too. 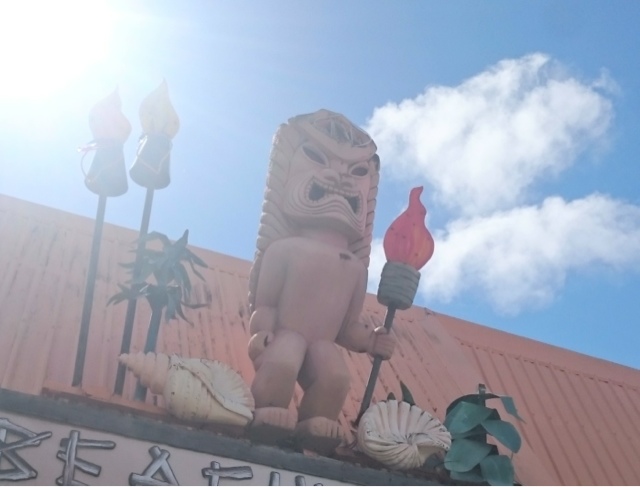 Having found Airlie Beach too expensive and where it was cheaper to stay in a backpackers in a share room than stay in the caravan park, I moved onto Hydeaway Bay … quite a pretty spot. I found at the Hydeaway Bay Caravan Park another ‘big thing’ not on any list … a Big Deckchair. I do concede that it isn’t as big as the one in Winton, although at least the vandals hadn’t been at this one, but is definitely qualifies as a Big Thing… plus it has ‘big thongs’ as well. 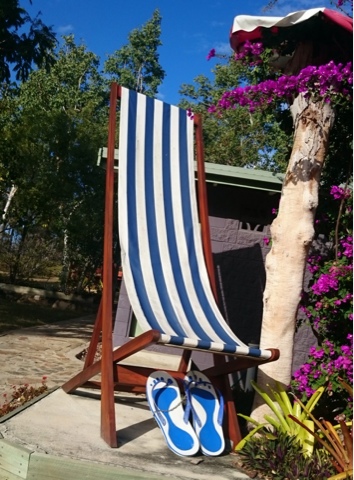 You know the old saying … a funny thing happened on the way to … well a funny thing happened on my way out of the caravan park at Hydeaway Bay … a fellow Taswegian stopped to say hi. As we were chatting as Tassie people do, he mentioned he had been a GP in South Hobart … and guess what … he was my Dad’s cousin, and I knew him when I was a nurse at St Johns Hospital … although I am sure he was a lot taller back then! Maybe I have grown and I didn’t know it? It was lovely to catchup and Dad was pleased about it when he rang me later that day.
Reminds me of the day my boys had gone to Russell Falls with the Baileys, friends of George’s and mine back in the dark ages … and still close friends to this day! There they were trouncing along when suddenly one of the boys said ‘Hi Uncle Mick’ … George’s brother was also visiting Russell Falls. There was also another time when Mick was walking along Brighton Pier (I think), and his uncle/cousin/family friend (I also think?) was coming in the opposite direction … I love it when things like that happen … so random, but not!
Before moving onto Conways Beach, I visited Dingo Beach … one of my favourite places to date … although see below for similar low tide event. It has a pub and live music on Sundays, so I sat for several pleasant hours listening to 60s music and drinking a little bit … there is no caravan park or free camping there … such a pity as I would have stayed there for several days if accommodation had been available.
That is the end of the ‘big things’ to date, but I have a few that didn’t make it into the blog to date …will  try and put them up tomorrow … it is just too damn cold right now … back to the warm camperhome … socks and all!
Oh before I go, I took a pic of the low tide at Conways Beach as I can only get a signal on my phone about 300 metres out in the bay at low tide. I was also hoping to get a high tide pic too, but as it got dark the tide was only in a bit … maybe tomorrow. This pic was taken from the high water mark … no swimming possible here … enjoy! 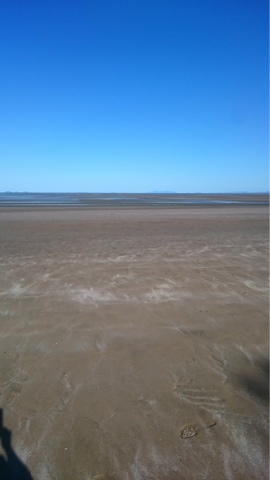