Posted on June 17, 2015April 19, 2018 by Margo O'Farrell
I have reached two exciting milestones … 10,000 kms so far on this ‘Big Thing’ trip and 3 months from leaving Mackay … amazing … it has flown by, and I have ventured as far west as the Bungle Bungles, as far north as Laura/Cooktown, as far east as Byron Bay lighthouse and as far south as Cockle Creek.

Cooktown has many interesting statues and sculptures. The musical boat was one of those interesting ‘things’, and is the source of the title of this post. It has about 8 ways of making music based on native instruments from the Pacific region. It was fun to play, but I did show my complete lack of musical talent.

I made a decision early on this trip not to take pics of statues as there are many in towns around this country. That said, I took one of Captain Cook as a comparison to the huge Big Captain Cook in Cairns … it was about 3-4 time smaller than the one in Cairns, but much more realistic and less tacky. 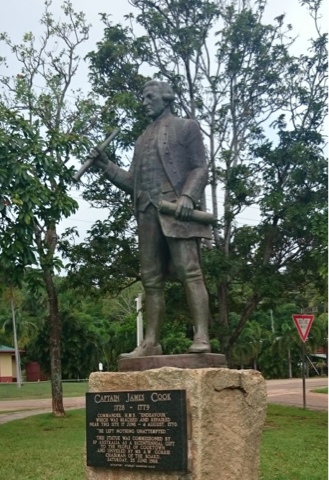 The other statue of which I took a photo is Mick the Miner because he looked so earnest! 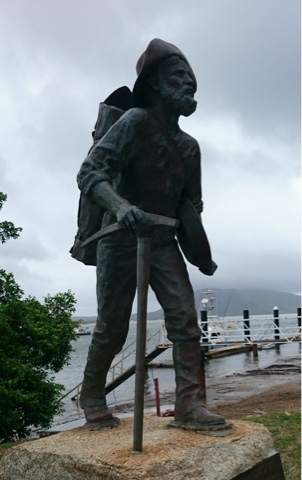 Onto Laura, I decided not to stay for the music festival as it was similar to Falls Festival, I didn’t recognise any of the acts, it was in the bush with mosquitoes and midges in abundance, it had almost no facilities, it was 33 degrees and muggy, it wasn’t for 2 days, there was no day passes, and didn’t finish until Sunday! I did call into the ‘information’ desk at the local cultural centre. Always on the lookout for ‘big things’ I found 2 examples … firstly the front half of a stripy cod … or so said the attendant. We did ponder that it would be more impressive if the back end was on the other side of the wall. It was unfortunately just the front end existed. 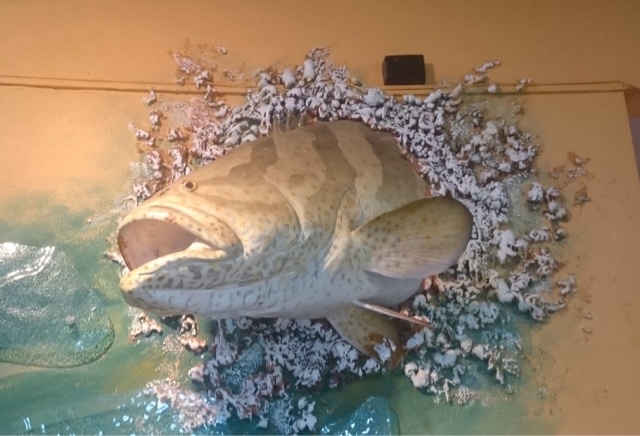 Secondly, a piece of art that depicted one of the local aboriginal ‘good’ spirits, Timara. BTW the extra set of ‘arms’ belongs to another ‘spirit’ at the back of the display. 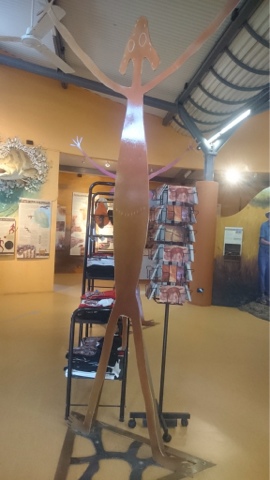 While travelling back to Port Douglas today, I stopped at a lookout near Black Mountain. The following information is taken from a website (http://www.castleofspirits.com/blackmount.html) as I am not sure I could do justice to the facts.

“Located in Queensland, Australia, 26 kilometres to the south of Cooktown lies the mysterious Black Trevethan Range, the Black Mountain. Consisting of granite jumbles of black rocks this mountain is inhabited by frogs, wallabies, gigantic pythons and a strange beast that goes by the name of the Queensland Tiger. Many walk into this collection of large black rocks, but very few ever walk out.”